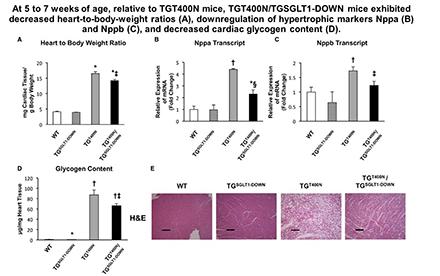 There are two families of cellular glucose transporters, the facilitative glucose transporters (GLUTs) and the sodium-dependent glucose transporters (SGLTs). Although it was thought that only GLUT1 and GLUT4 are active in cardiomyocytes, we discovered that SGLT1 protein is present in cardiomyocytes. These findings were from our studies of a glycogen storage cardiomyopathy caused by gain-of-function mutations in the PRKAG2 gene that encodes the γ2 subunit of 5’-AMP-activated protein kinase (AMPK). To study cardiac SGLT1, we constructed two transgenic FVB strain mouse models: (1) cardiomyocyte-specific knockdown of SGLT1 (TGSGLT1-DOWN mice), using transgenic RNAi technology; and (2) cardiomyocyte-specific doxycycline-suppressible conditional overexpression of SGLT1 (TGSGLT1-ON mice). Using these models, we have shown that SGLT1 upregulation contributes to PRKAG2 glycogen storage cardiomyopathy. We next examined cardiac SGLT1 in diabetes and ischemia because AMPK is known to play a role in these conditions. We have found that pharmacological activation of AMPK upregulates SGLT1. TGSGLT1-DOWN mice are protected from cardiac injury following ischemia-reperfusion, and in type 1 and type 2 diabetes mellitus. The aims of our ongoing studies are: 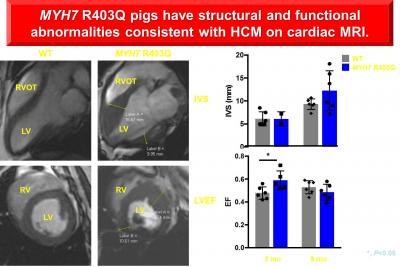 The aims of our ongoing studies are:

Cystic fibrosis (CF) results from mutations in the gene encoding the cystic fibrosis transmembrane conductance regulator (CFTR), a cAMP-activated and ATP-gated chloride channel. CFTR is also expressed in cardiomyocytes and vascular smooth muscle cells, where its function is largely unknown. Despite the high prevalence of heterozygous CFTR variant carriers, little is known about how the heterozygous carrier state affects health. Primarily in animal studies, a functional role of CFTR has been implicated in myocardial hypertrophy and heart failure, cardiac ischemia/reperfusion injury, and vascular smooth muscle function. In collaboration with Dr. Barry London, we determined that heterozygosity for the most common CFTR variant (ΔF508) was associated with a higher incidence of death and the combined endpoint of death/ventricular assist device (VAD) placement/heart transplant in two large cohorts totaling ~2000 Caucasian subjects with heart failure. Therefore, CFTR variants may represent a heretofore unrecognized but common genetic modifier of heart failure outcomes. It is unknown whether decreased CFTR function worsens heart failure outcomes through direct effects on cardiomyocytes, such as perturbations of ion homeostasis and contractility, or through dysfunction in other organs such as exacerbation of lung edema. We hypothesize that heterozygous CFTR variant carriers have subclinical cardiac, pulmonary, and/or vascular dysfunction that predisposes them to the worse clinical outcomes. The aims of our ongoing studies are: 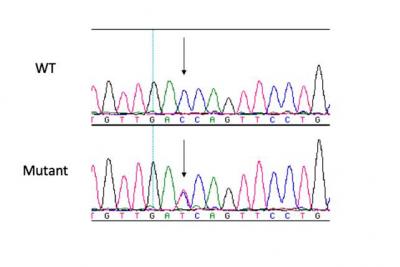 ​Previous human genetic studies have identified the etiology of many heritable cardiovascular disorders. Hypertrophic cardiomyopathy (HCM), the most common heritable cardiovascular disorder (prevalence 1:500), has been associated with mutations in at least 19 genes, most of which encode sarcomere proteins, along with a few encoding Z-disc and calcium handling proteins. However, mutations are detected in previously identified genes in only ~50% of patients. Therefore, we hypothesize that variants in other heretofore undiscovered genes that regulate the sarcomere, the Z-disc, or cellular calcium homeostasis, including metabolic genes, can directly cause disease. Large scale forward genetics in mice is a novel approach to identifying these undiscovered genes. The NHLBI has funded a mouse ethylnitrosourea (ENU) mutagenesis program that is identifying genetic pathways contributing to congenital heart disease. Preliminary studies show that 6% of fetuses homozygous for a given mutation have isolated cardiac hypertrophy. Therefore, our overall objective is to leverage the unique resource available to us through this ENU mutagenesis program to recover novel genes associated with HCM. Our aims of our ongoing studies are: 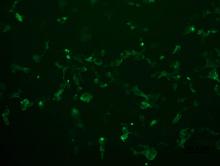 The long-term response of the heart to a wide range of injuries is maladaptive ventricular growth and remodeling characterized by dilation and/or hypertrophy. This process ultimately leads to heart failure, which is associated with a 20% lifetime risk and is the most common cause of death in the United States.  The long-term objective of our research program is to elucidate the molecular basis for ventricular remodeling, ultimately uncovering therapeutic targets. Cardiomyopathies are primary disorders of cardiac muscle (myocardium) characterized by cardiac hypertrophy or dilation, and associated with heart failure, arrhythmias, and sudden cardiac death. These disorders result from heritable genetic mutations, and thus represent genetic models of cardiac hypertrophy and dilation. Using high-throughput next generation sequencing technologies, we are screening a cohort of approximately 2000 unrelated human subjects with cardiomyopathies for pathogenic variants in genes not previously associated with heart disease. In addition, we are identifying modifier variants that exacerbate or attenuate the phenotype.

Chronic lung, heart and vascular diseases such as idiopathic pulmonary fibrosis (IPF), idiopathic pulmonary arterial hypertension (IPAH) secondary pulmonary hypertension (PH), and left ventricular (LV) and right ventricular (RV) heart failure affect a significant portion of the population and are collectively the most common causes of mortality and morbidity. Although the molecular mechanisms of individual diseases have been extensively studied over the last decades, it is unknown whether the separate organ diseases that sometimes share risk factors and co-occur in the same patient also share similar molecular mechanisms. Our overall objective is to use high throughput approaches and the extensive resources of well-characterized tissues to identify molecular phenotypes that are common or distinct across and within disease and organ boundaries. To identify such phenotypes we will: 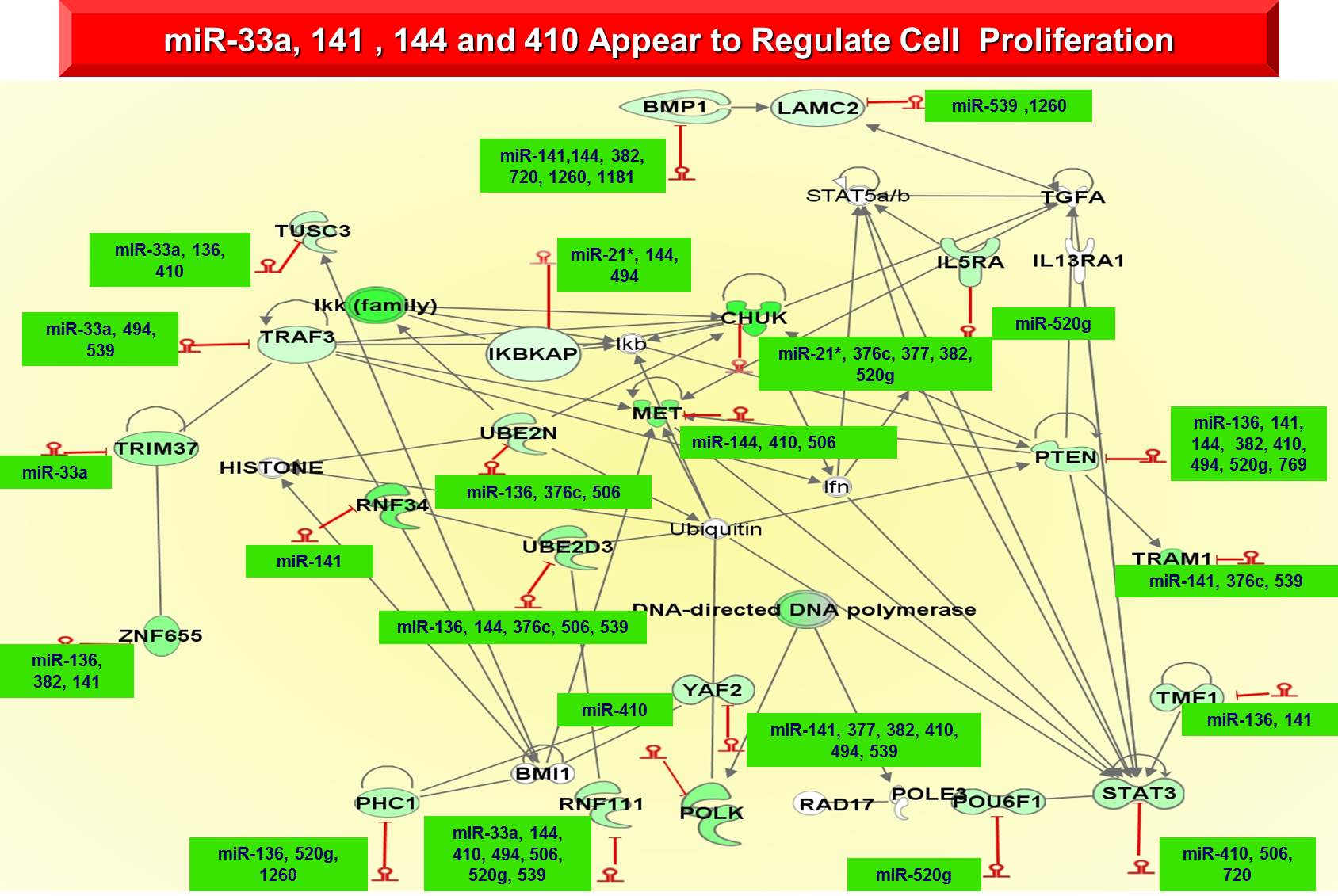